(unfortunately, it’s also now infamous for being part of Thailand’s Dark Side )

We arrived before 7 am in calm seas, intense diesel fumes and were welcomed by a flotilla of plastic detritus.

The warm morning sunlight was much appreciated after the dark Faustian atmosphere aboard the catamaran ferry, always more so when, at points, you think a threshold has been crossed that can never be uncrossed…the horror! (it was that bad, read Bangkok ).

But we had arrived! Whatever had happened previously, we were on a frikkin island paradise! We would embark on our PADI refresh courses and experience underwater beauty we had both dreamed about…

Life I’ve found, is mostly about expectations.You could probably expand that to say it’s about communicating expectations effectively to avoid misunderstandings but that’s a whole other post…

My mother loves to give pearls of wisdom to anyone who will listen. I’ve been there when she has said something profound and the audience has dismissed her because she is demure in stature and approach. However, she is very far from the patriarchal stereotype of a wife and mother, anyone who has had a debate with her will know that…

Anyways, she once said to me when I was pretty upset by what I perceived as a “good friend’s” oddly malicious behaviour towards me:

“Fowad, why are you so upset? Because he actually hurt you or because you didn’t get what you expected from the friendship?”

Even though I have studied psychology since I was 17, have a degree in it and have throughout my careers approached interactions with other people with Jung, Maslow and Freud competing in the back of my mind for the best way forward, what my mum said opened my eyes.

Therein lies the greatest rub, what we expected from Koh Tao was based on what we could glean from Lonely Planet…

We learnt during the trip not to trust Lonely Planet unless as a last resort (pun intended :-), ie. if we couldn’t talk to any locals/ travelers and had no internet access/ blind luck had run low.

By the time you get to where it says is a “little known oasis for the traveler on a budget” said location is pretty much guaranteed to be full of trustafarians/ complainers/ people saying “how quaint!?” in a variety of languages and/ or dodgy locals trying to make a buck out of gullible people plus whatever the previous prices were if you buy stuff there after it’s been published your budget won’t last that long…I digress.

Anyways, Koh Tao is touted as a tropical paradise with excellent diving and friendly people. It’s Thailand ffs! Everyone is so friendly…

So, that was our expectation, still.

As mentioned in Bangkok, Farah gets motion sickness and after the journey her skin was developing what can best be described as a hue of chartreuse whilst her eyes were looking a bit like egg yolks (sorry if you’re reading this Farah but it’s true…).

We made it onto the wooden jetty but only after the ferry staff managed to shout their displeasure at our continued existence and lack of speed whilst getting of the boat, at volume constantly:

(Not for the first or last time during our trip, I was reminded of the stereotype of harsh soldiers in every war movie ever).

So, Farah being at this point half conscious and delirious was not able to carry her backpacks (60 L and 20L) or really move her feet unaided.

Fleetingly, I thought of asking someone for help but most of the other travelers looked like extras from the Walking Dead’s more gruesome episodes and the staff seemed like Negan’s willing buddies…

So, it took a couple of trips to get all the bags off the boat after I’d made sure Farah was safe and not in danger of disappearing Taken style.

Not sure if they make proximity alarms for incapacitated people but someone should. A dual homing beacon for ICE contacts and proximity alarm to keep ne’er do wells away (if you read this and make it bung us a few quid!).

Anyways, back to about 6:30am on the main drag of Koh Tao.

Farah had researched the place we were staying called Tao Thong Villa 2. In all she had read the place was described as a peaceful hideaway with friendly staff and good food. 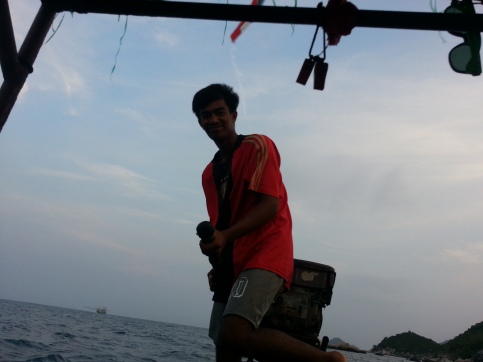 She managed to talk to the water taxi driver and give him the name of the place. So, we lugged our combined 160L of kit onto the narrow wooden boat with one of those really long propellers and set ourselves for the last bit of the tortuous journey. The engine was constantly pumping out really noxious fumes on the short journey and by the time we arrived on the small sandy beach Farah’s chartreuse colour had turned celadon.

We were so glad to stop moving when we slipped into the water with our bags, it didn’t matter we’d been conned out of a small amount of money again by the water taxi driver. The ground wasn’t moving.

It was early, about 6:45am but we had contacted the resort to say we would be there early. They had replied to say it would be fine and they had a covered waiting area/ lounge we could use until the room was ready.

So, I was was expecting maybe a tired early morning welcome and maybe tea…That didn’t happen.

I managed to rouse the matriarch of the establishment, who was none too happy. She shouted at me to wait…I sighed.

She was a small lady, her face covered in some white rejuvenating cream wearing colourful nightclothes, drowsy but very clear that she wasn’t happy at the interruption to her morning routine.

“Wait outside! Not here, outside!”

So, I returned to Farah who was now a whiter shade of pale surrounded by stray dogs below  a pretty awful outside toilet on the rocks by the beach. She doesn’t have a good record with dogs…but was so ill she couldn’t even shoo them away.

We stayed like that for another 2 hours whilst the staff got up. Luckily we had bought a couple of small water bottles (very overpriced) at the jetty, so the nausea and feeling of constant movement had subsided slightly by the time we were allowed into the lounge/ restaurant area.

Inside was a large wooden room with low tables and cushions on the floor. A small sort of bar and kitchen hatch took up one of the walls and the others faced out to the sea and beach. It didn’t look that clean and no one was there, so I was a bit pissed off that we hadn’t been able to even sit there earlier. Instead we had to use our backpacks on the sand…ahem. I know I’m banging on about it but I just find it hard to understand some people’s ways…

After another hour, one of the brothers who worked there (I think it’s a family business) came over and rather truculently showed us to where our cabin was.

We are standing by a wooden shack on top of long poles on the south side of the place. It looks like a badly constructed shed but fuck it we’re on a budget and Lonely Planet said it was cool…

The mattress smelt bad and was stained, as were the very thin pillows. We didn’t care at this point and just collapsed.

Was just listening to this whilst writing: Sisters of Mercy