Today I attended the funeral of a local legend.

She was my parents’ practice manager, my boss for a while in the 90’s and  a close family friend. She always sent cards at Christmas, baked wickedly good cakes and was someone I respected all my life.

She always had an eye for bargains and would tell you the best deals “in town” and was forever talking about her children and Frank, her husband, whom she loved very much.

A larger than life lady who told it like she saw it with love and affection but would suffer no fools or nasty people. You always knew where you were with Jean, no double talk or fakery.

To properly explain how I felt about Jean, let me tell you a little about my childhood.

I grew up in Pudsey, Leeds (UK) in the 1970’s and 80’s which was for want of a more precise description, extremely racist. I think the population was about 40 000 and we were one of only four non – white families who lived there.

One of my first experiences of racism was when I was about 7 years old  maybe younger, now I come to think of it but sometime in the 1970’s.

My parents worked all hours night and day in the surgery and on call, so paid a local lady (not Jean, she worked late too) to keep an eye on me and my sister after school until they could finish work and come home for the evening meal.

They were always late, they care a lot about their patients and wouldn’t leave until they were sure everyone was in the best health possible.

As a boy I was always curious and enthusiastic and this one time, running and smiling to show the babysitter something I had discovered in the garden or house, she was busy at the door chatting to someone, so I waited patiently, she hadn’t noticed I was there. I was always taught to respect elders and not bother them until they were free to talk.

The other person must have been someone new working at my parents’ practice stopping by on the way home and must’ve known the babysitter, she asked her:

I heard my previously cherished confidante and protector reply:

“They’re paki’s but it’s okay, they pay alright and they don’t smell as bad as the others”

I knew at that age that a “paki” was not a good thing, something to make fun of, like on the TV in Mind Your Language or in the playground. Something less, not as good as others.

But until that day I had never equated that word with my parents or myself.

At that early age I didn’t identify with “paki” it was not me.

I was better than that.

My path in earlier life was shaped by that experience and reinforced many times in and out of school. Most of those experiences I would not wish on anyone, as you become older you become more obvious and a larger target…

I remember meeting Jean, working with her and knowing her most of my life  and I can honestly say I never heard her speak ill of my parents. They had disagreements, like everyone but she always treated them with mutual respect and I would learn later with love. With her I was never a target.

I couldn’t see that until much later and didn’t appreciate it until I left Yorkshire many, many years later.

In that environment being the person that Jean was must have been difficult. She had to deal with her employees, patients and sometimes tired and stressed Drs.

But she always remained herself with her own unique blend of straight talking and humour. She would sometimes be incredulous of the antics of the workshy, always dedicated to being better, doing it right and getting the job done proper!

As a young boy she always accepted me and treated me with love. When I had a mohican that my parents lost sleep over, she accepted my follicle protest with aplomb.

When I went off the rails and spent years moving in dubious circles of similarly confused alternative individuals with the obligatory changes in style and fashion to show how much style and fashion didn’t matter, Jean never made me feel stupid or lacking. She just had a way of letting you know she didn’t entirely agree but that life goes on.

And after all the mad hair had gone, the odd friends and the questionable life plans, Jean was still there enjoying her life the way she liked it. In a community of people, respected by all who knew her, having a laugh and joke over a cuppa with some nice cake poking fun at the crazy world of today.

I last saw her when I gave Frank a lift home from Asda. He always walked to the shops as a routine and I would see him loaded down with supplies, so this one time I managed to get him to accept a lift.

I helped Frank with the bags into the house and Jean was at home, her sight was not good at that stage but she recognised me. Again, the same loving and interested lady offering tea and cakes…

In this age of faster faster, more more, saturated with messages to be different, to change your life to buy more, to be more, to be with more interesting people…Jean showed by example that you can be happy by just being yourself.

I never thought of her as old because she never spoke like she had given up. She was always interested in what you had to say and never lost her enthusiasm for life. 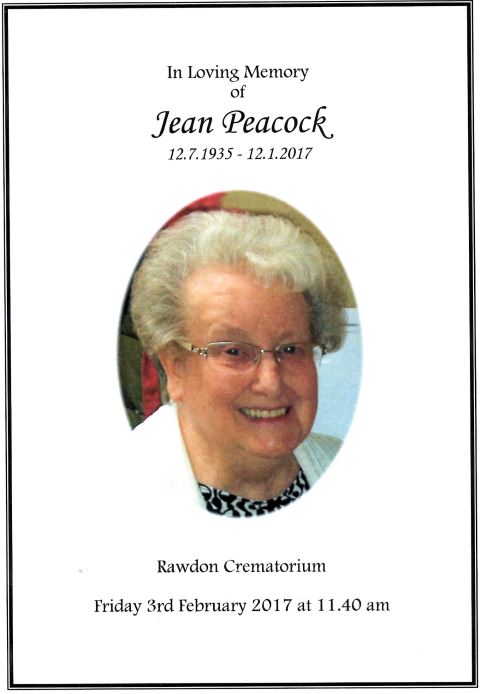 Traveller, blogger and reviewer View all posts by fowad